These stages have evolved over time and the ranges are somewhat elastic, mainly based on the quality of the team involved.  If you have three top people with 15+ years’ experience and success each as CEO, Chief of Product Development and head of sales/marketing you may be able to get a pre-money valuation of $5M to $10M today with a quality deal. With just a founder and a business plan, your company is likely worth less than $500K.  This assumes a $1B market potential, $100M+ revenue potential in five year (top 5% of all companies ever)  and some nice progress on product development or actual revenue. 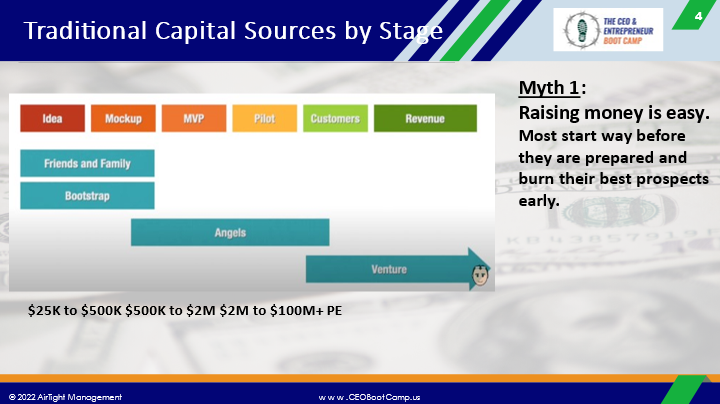 Bootstrapping – This is where the founders are putting in sweat equity, and possibly a small amount of cash investment as well.  Founders often bootstrap longer to keep more of their own companies by investing $50K to $250K or more. I put more than $750K in my first company before closing a $34M strategic investment with IBM. I had taken in about $1M in angel investments also. This was a three tranche deal with increasing valuations built into the investment.

Seed =-Just a founder and a plan – Usually $50K to $500K at most, as the pre-money valuation is likely under $1M. More and better team means higher valuation, less dilution and a higher probability of closing a funding deal.

Series A – Usually a $5M to $20M deal for venture capitalists. Some would operate only in much larger deals because they have larger funds. Hence, your company’s value needs to be double or triple or more than the amount raised so as not to sell more than 50% of the company in this one round. Generally you need to have “traction” which means paying customers. Or a working MVP.

Series B – Double to triple the numbers for a Series A, or more.  If you are a “Hot deal”, meaning everything is going well with a great team and product that has lots of traction. The valuation may shift to being based on your financial projections now, when previously these projections were almost entirely ignored as fantasy. Hence, we see the $100M deals with unicorn valuations around here, usually because they have proven many elements of the business and driven down risk a lot.

Series C – Triple or more the Series B numbers. This is where you see average investments of $100M and more. Other letters mean the company needs a lot of capital to accomplish its goals and is likely a large market opportunity also. For me, this many rounds is a negative because they have often burned a lot of cash without generating a profit. Typically, a good company should not use venture capital after a Series B or C as there are far cheaper sources of money by then.  However, VCs may control the board and vote themselves new shares. They want to use much more (lower risk) capital but still get high returns.  Typically, not smart for the founders and past shareholders, as the VCs can take more control.  A good CEO will see there is a competing investment source to negotiate the best deal for all shareholders, not just the VCs who might own a majority of stock. However, they cannot really vote against a better deal due to the conflict of interest.  At this stage, it is also likely that just slowing growth some can allow the company to grow without more diluting capital.   So it is rarely needed unless the company is hugely capital intensive or need to grow fast to grab market share.

After this there are sometimes “Mezzanine” deals which are based on funding a company to a planned IPO. They might fund 6-12 months of operations.

A “bridge deal” is usually short-term and rushed. It is needed capital to stay alive to close a much larger financing that is in the works. These investors get a discount to the next deal to take more risk. 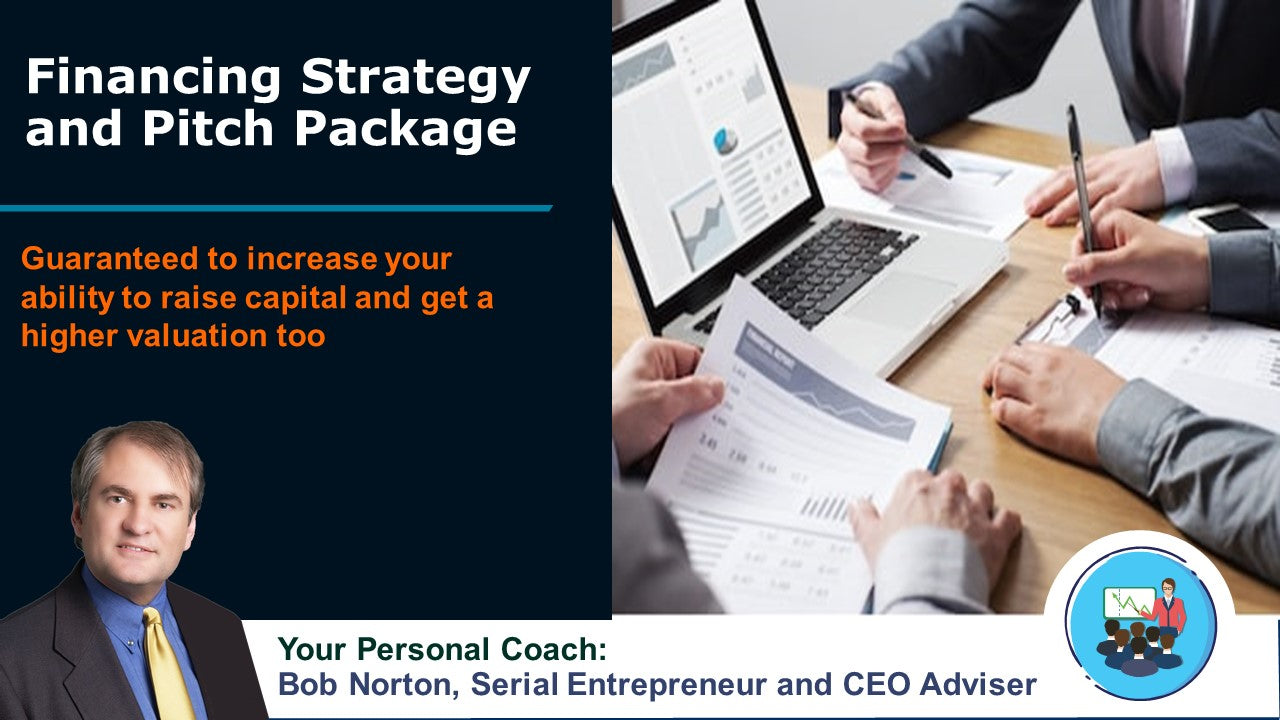 As with any consultant, the key is picking the right one, that has done EXACTLY what you want to do many times before.  Most will take any job they can get and do not have the experience actually raising capital themselves as a CEO ideally.  Would you hire a football coach that never played football?  Some might write business plans, help improve slide decks and advise on the financial projections, but few can take those tools and actually help execute the process of approaching investors to close a deal.  This is a different expertise. It requires broad experience. We have helped close over a hundred deals with around $1 billion in funding.

You want to ask for a list of deals they have closed, meaning ran the entire process and project. And it needs to closely match your company’s stage of development. Startup funding is completely different from mid-market companies that have a history of revenue or mature companies that can typically get bank financing based on cash-flow and/or assets.