There are many commonly accepted principles about success that come up again and again like pursuing your passion (so work is fun, not a burden), focus on a clear mission (medium term) and vision (long-term) so you will focus and be immersed in the problem, the solution and the value you create for your customers. Long-term commitment and persistence are never optional, either.  But there is one principle that few people talk about that can be the foundation of all of these, which I will reveal in this article.

My dad gave me the gift of the standard of hard work, learning and discipline throughout his life.  As did a couple other mentors in my youth.  My father read lots, listened to vocabulary tapes in the car, bought three different sets of encyclopedias for the family, paid for private schools, did transcendental meditation and lots more.  He was committed to constant learning and improvement despite his illness.   My father was a hemophilia and wore leg braces for many years when I was very young.  This disease meant his blood would not clot, and he could literally die from a bloody nose.  I remember going to a doctor’s visit with him once when I was about eight years old and the (not so emotionally intelligent) doctor saying to him, he was “the oldest hemophiliac he ever met”.  What a dope to say that in front of his young son.  I cried alone in my bedroom that night, thinking my father had very little time left. Thankfully, he lived another decade and passed when I was a sophomore in college at age twenty.

So, my dad could not do any kind of physical sports because a small cut or even an internal bruise could literally kill him. Luckily, I did not inherit that terrible disease.  Most hemophiliacs were wiped out by the aids epidemic in the 1980s because their Factor 8 medicine was made from hundreds of blood donations, and the CDC decided not to spend $5 per test on donated blood to prevent contaminated blood from entering the supply.  Matthew Modine’s movie The Band Played On tells this story of government incompetence that continued for years after they knew it was happening. Basically murder.

I guess that lack of doing sports with dad contributed greatly to me being a computer and science nerd in my youth, long before that was cool.  My friends dominated the science lab, Ham radio club, chess club, and building rockets with eight engines and doing elaborate practical jokes.  And we all had an insatiable thirst for learning, and accomplishment.

Of course, hard work is a very commonly repeated maxim, too.  But this is like saying a car needs gas. Trivial, obvious, and everyone should know it.  Hard work is always needed as nothing worthwhile comes without some investment, sacrifice and time. You cannot create something out of nothing.  This is just a law of physics. Energy can be transformed, but not destroyed or created.  E=MC2 and all that.  And 95% percent of the time or more, there are many years of struggle and hard “learning” before any big company or career success happens.

Building a company is a marathon, not a sprint.  It takes lots of resources, time and money.  That is just the nature of life.  If it were easy, then someone would have already done it before you did. And there are always many unexpected surprises, pivots and turns in any journey.

What I am saying is the journey in the diagram above generally starts at least five years before this diagram above starts. That is when the yet unformed team is developing its expertise to accomplish this, as yet undefined, mission. And, not coincidentally, the same five years (or 10,000 hours) it takes to reach “unconscious competence” when your brain is neuroplastized to doing things in the blink of an eye that others could not figure out in a week, or even a year. Malcolm Gladwell’s book Blink is on this phenomenon, which we as the human race have already known for centuries by having five-year apprenticeships since most trade skills were even invented back in medieval times.

This is not a new idea, but it is one society has forgot and even teaches children improperly that “you are perfect the way you are and can accomplish anything”.  The whole “everyone gets a trophy” idea for young kids is the worst idea in history in my opinion.  It teaches kids entitlement and pure self-esteem over the reality of real-world work and competition.  They enter the real-world and workforce unprepared to work hard.

I created the diagram below to show this concept for the first CEO Boot Camp in 2004. And it is in three dimensions to show the order of magnitude increase between data (knowing a fact) and wisdom which is being able to use all the levels above effectively by integrating information, knowledge, and experience. 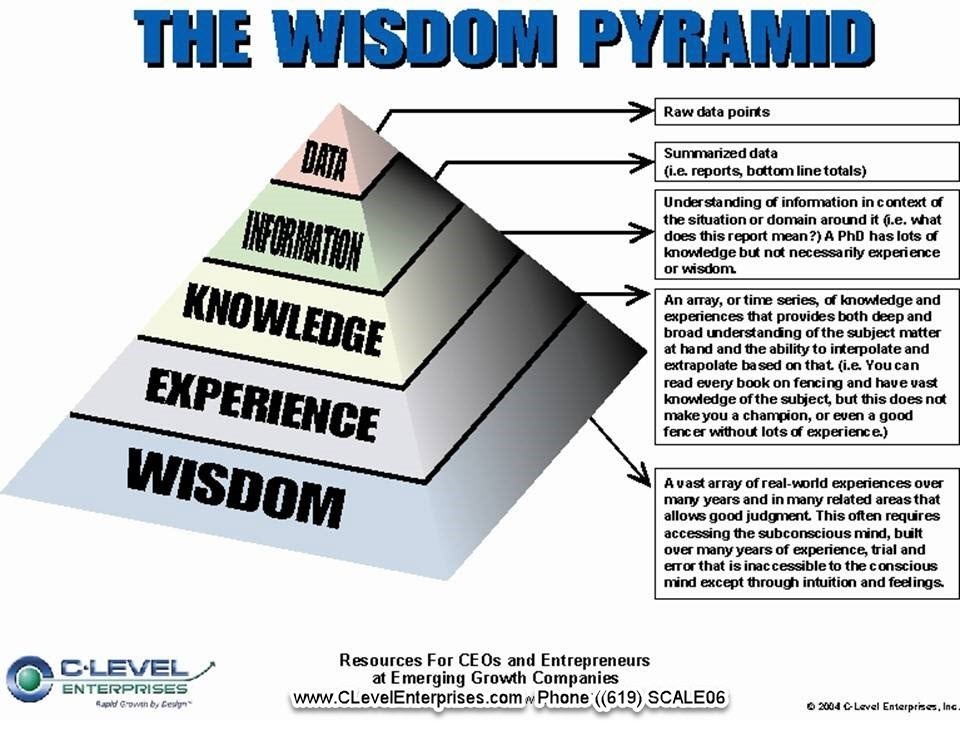 So many years before founding a company, you and your future team are building the expertise needed to contribute in part to this company and vision.  The formative process can even take decades, as it did for Pixar (see my article on that book and case study here).   Inevitably you will need other talented people who did the same with potentially decades of expertise in the domains of marketing, sales, finance, operations, technology, management, etc.

So how to you get to “Wisdom”, which is only a particular area of expertise?

Study, thinking, yes literally thinking as that is what physically rewires the brain’s neurons to become a specialized parallel processing supercomputer to do just that thing. Some may call it intuition, or being “in the zone” or talent, but it is all the same that comes after many years of practice.

What I consider the most important element to success is the discipline needed to constantly learn and improve. Brian Tracey called this ” sharpening the saw”, referring to Abe Lincolns quote when asked what he would do if he had an hour to cut down a tree?”

“If I only had an hour to chop down a tree, I would spend the first 45 minutes sharpening my axe.” – Abraham Lincoln.

Franklin-Covey defines “sharpening the saw” as: Preserving and enhancing the greatest asset you have—you. It means having a balanced program for self-renewal in the four areas of your life: physical, social/emotional, mental, and spiritual. Others have differing definitions of the scope of this, but all mean dedicated times and effort to work on yourself.

Of course, for our work, we are the “saw”. And so this is simply a commitment to continuous self-improvement. Ninety-five percent of winning anything is the preparation, not the execution itself.  Mohammad Ali won fights due to his years of preparation, not any single move or punch. And the same is true with 99.9% of successes. The others won the lottery somehow or had extraordinary luck. And luck is never a strategy.

When I raced sailing yachts, the bulk of the ability to win happened literally months before the race.  This was the build up of my experience and abilities and that of my crew to make the boat go fast in any wind, tide and current conditions.  Each situation was different because there were dozens of factors at play.  Practice sessions, preparation of the boat to have a clean bottom for less friction, the right equipment in good shape, the right sails in good condition, and literally a hundred other things.  So I mean it literally, that 95% was baked in before the race started.  Sure, there is some element of luck, the wind can shift against indicators and norms, but experts read the water a mile away and are prepared.  In a company, the economy can change, but expert CEOs assure they have plenty of cash runway to weather any storm.  Think positive and set aggressive goals, but also have a backup plan, as almost nothing goes exactly to plan.

Jeff Bezos said he found it curious when people congratulated him for quarterly financial results because he said in his mind those things happened literally years before and were baked into the numbers back then. So the congratulations were years late from his perspective. That is how visionaries think. They are thinking abut years ahead, not months or weeks. 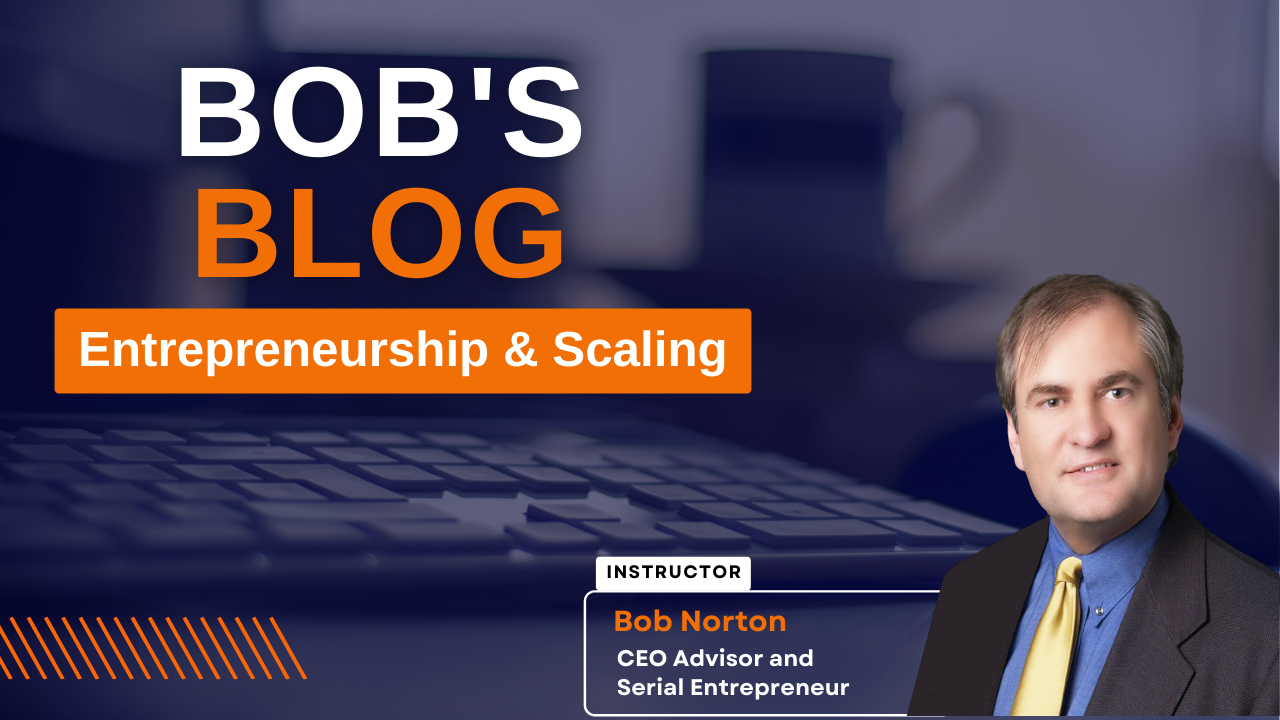 To get entrepreneurship tips, check out Bob's Blog

So, what is this #1 thing that can create success in anything? It is dedicating time and energy to getting better at what you do. Constant learning, as everyone can always learn more.

Bill Gates, Warren Buffett and many others also call this the “5-Hour Rule”.  Which says dedicate an hour of your day to reading and learning from others.  Often people say reading but obviously other media like audiobooks, videos, TED talks and more would clearly advance your abilities if they have any relevance to your business objectives and AE from good sources.  As a Software Engineer, I always dedicated Friday afternoons to working on an unassigned project that I knew could help the company and keep me focused.

I spent over a decade reading four to six books each month on business, and eventually read over 1,000 business related books.  And read book summaries on hundreds more.   I read only non-fiction books by smart people who had deep expertise in some topic, even though, as a CEO and entrepreneurs, we need to be generalists to manage the many experts and areas of the business at the strategic level. I got my fiction, also good for creativity and rest, in film and other art and rarely read fiction.

Long-term, this constant self-improvement is what really separates the big winners from the also-rans in business. And in a world where most people graduate school and stop learning new things, this strategy puts you in the top few percent eventually. Formal education is such a tiny part of learning.  The potential learning from a commitment to life-long learning can be 5 hours X 2,000 days per year times 40 years = 400,000 hours of learning!  If a college degree is full time for ten months a year for four years, that is only about 6,400 hours. That is 1.6%  of the potential from life-long learning at only an hour per day!

What I have added to this principle is defining it more, not as just learning and reading, but adding carving out time for planning, and meditating on problems and solutions. I also submit problems to my subconscious for thought during dreaming. As your mind can be busy at work while you are sleeping too. It can and will work on problems for you just by thinking about the problem as you are going to bed.

Well, I am off to walk my dog now and will have a book playing in my ears while I exercise.  Put five to ten hours a week on your calendar for reading, thinking and planning. It will pay off big time with patience.  And is about the only guaranteed way to stay ahead of the competition for life. 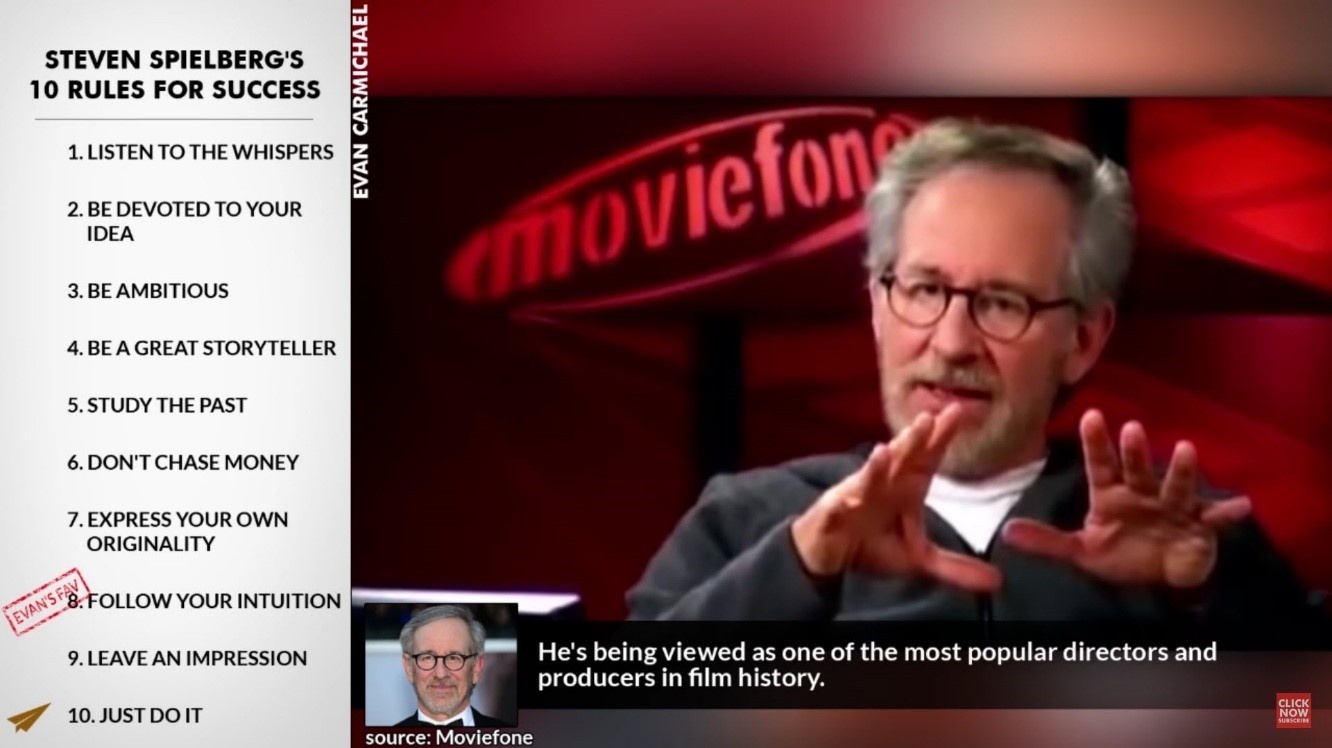 Call (619) SCALE06 or email info@AirTightMgt.com for a complementary strategic consultation